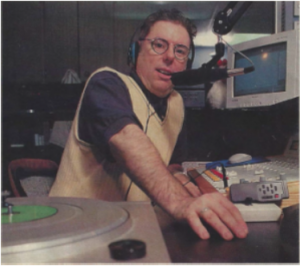 Peg and Jim Amidei are unlikely recruits to the techno avant-garde. Jim, 46, runs heavy equipment for a construction company in the Chicago area; Peg, 48 in March, is on a disability pension. Their favourite listening is from the Fifties and Sixties – Petula Clark, Roy Orbison, Johnny Rivers. But when they relax in their den in Wheaton, Ill., listening to radio, the music they enjoy is from none of a dozen or so local broadcasters – or from any conventional off-air signal at all. It comes – in near-CD quality, now that the couple has invested in a high-speed Internet link – from Vancouver. Treasure Island Oldies is a breezy step back to the dashboard lights of the baby boom’s youth, complete to period Coca-Cola commercials (unpaid-for as well as unsanctioned by the Atlanta soft-drink giant) and custom-produced singing jingles (laid over music from the archives of the last century). “It’s like what radio used to be back in the early Sixties,” says Jim.

But this melodious blast from the past is also a taste of the future for the granddaddy of all electronic media. From “personal” radio stations to customizeable ones, from “All Van Halen, all the time” to All-Hobbit radio (dramatizing the famous Tolkien sagas), the Internet is revolutionizing how we listen – and broadcast. Michael Godin, a 47-year-old former radio music director and recording executive who is now a broadcast consultant in Vancouver, owns the mind, voice and record collection behind Treasure Island Oldies. He calls himself a “pioneer” of radio’s next frontier. “I am on the right edge at the right time,” Godin believes. “Broadcasting on the Internet is to conventional radio what MP3 is to the recording industry.”

Which is to say that, downloading MP3 music files, Internet radio is a potentially big challenge to a big industry. So far, Treasure Island has produced no pots of gold. But it, and a growing number of other Web-only “radio” stations, as well as conventional broadcasters extending their reach over the Internet, are redefining a medium born 99 years ago when Guglielmo Marconi snatched a signal transmitted from Poldhu, Cornwall, out of the air over St. John’s, Nfld. The new breed of Internet-only stations are not, strictly speaking, radio at all. Conventional radio transmits an over-the-air signal on a preset frequency that any similarly tuned receiver within range can pick up. Internet radio is more accurately called streaming audio. Listeners “tune” by accessing a Web site; the role of a receiver is played by various software programs. The differences are not trivial.

Software, for one thing, costs far less than those old-fashioned towers with their huge transmitters demanding 50,000 kilowatts of juice to pump out the tunes. A beginner can download broadcast software from industry leader RealPlayer for as little as $2,930 (the basic version for the listener is free). And at Live365.com, anyone can be a deejay for no charge at all. Or a talk-show host, radio preacher or political commentator. The California-based home of All Van Halen and All-Hobbit radio offers all who sign up their own radio channel, with enough streams to reach up to 365 listeners logging on at one time.

The site’s menu features dozens of U.S.-based Christian stations and Web-casts in both major and minor languages. Other Web sites list and link to thousands of mainly conventional broadcasting stations that stream off-air programming onto the Net. Jazz from Japan. Latin from Brazil. Techno from Germany. Celtic fusion from Australia.

Depending on the listener’s computer equipment and connection to the Internet, it may not all come in with perfect clarity and dynamic range. On anything less than a high-bandwidth connection, music can sound as tinny as an old six-transistor radio. Fast connections (via cable, high-speed phone lines or dedicated office links) deliver something closer to CD fidelity – but still suffer from Net congestion, causing unexpected blanks in programming. Glitches remain common with streaming software. Popular services, meanwhile, can run out of available streaming channels, shutting further listeners out. And, of course, it is not yet portable, or in your dashboard.

Most observers predict those growing pains will soon be over, as Internet bandwidth grows, more users acquire fast connections and more wireless systems arrive for the Net. Meanwhile, the technical differences between off-air and online broadcasting are already shaping e-radio into something apart from its predecessor. Godin’s Treasure Island program, for instance, is Web-cast live only on Sunday nights, Pacific time. But fans can catch archived programs at any time. During the live show, meanwhile, they can join an online chat room to swap thoughts about the music with other listeners or put requests to Godin.

The combination of archiving programs and using the Internet’s capabilities to add new breadth to the conventional radio experience is repeated elsewhere. The CBC was an early Net presence: its first Web-cast went online in 1996. Now, both its Radio One and Radio Two national network services and most regional services are online with live streaming signals. But many individual CBC programs and local stations also use the Web to make archived portions of shows available for replay on demand, as well as to invite feedback or post extra information. The CBC’s online listenership – currently about 4,700 people a day for live network programming and close to that number for replays – is some distance from eclipsing its off-air audience. Still, hitting the present maximum of 600 listeners streaming at one time is a “regular occurrence,” says Bob Kerr, manager of radio new media. The CBC will be adding another 1,000 streams soon.

At a Toronto-based site called TheIceBerg.com, some of Canada’s most experienced conventional private broadcasters have another prototype for what radio may become on the Internet. The site’s three channels are all aimed at the same young demographic, but each delivers its alternative and underground musical fare on different terms. On 1Groove, top nightclub deejays mix tracks; PrimeTicket streams concerts from Toronto clubs; 2kool4radio is a mix of music and information that features, among other things, an online Wiccan chat room. Programs are archived so listeners can access them at their own convenience and in their own time zone – wherever that may be on the globe. The site has financial backing from Harry Steele’s Newfoundland Capital Corp., owner of a chain of traditional Canadian radio stations. It also has a business plan that anticipates revenue both from the Net equivalent of conventional radio commercials, and from other profitable ecommerce directed at what Iceberg vice-president and veteran broadcaster David Marsden calls “global lifestyle communities” of Web-listeners.

But there are more hurdles for Web-casting. Treasure Island and TheIceBerg are still looking for their first advertisers. Canadian law, meanwhile, has yet to address how royalty rights will be respected on the Internet; as a result, Net-casters do not pay the same fees to composers and performers for the use of their material that conventional broadcasters do. That may change quickly if Net-casters begin making serious money. What won’t change, Godin and Marsden insist, is the Internet’s ability to bring together audiences beyond the reach of even the most powerful conventional radio signal. Says Marsden: “I believe it will change the face of old-fashioned radio.”

It has certainly changed life for the Amideis of Wheaton, Ill. Contacts made in Treasure Island’s chat room have blossomed, says Peg, into friendships that are “just like family.” Last year, the Amideis travelled to Canada for the first time since their teens: they flew to Winnipeg for a “reunion” of Treasure Island fans.

This article, written by Chris Wood, originally appeared in the February 28, 2000 issue of MacLean’s Magazine.