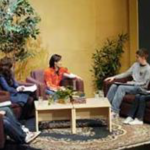 Be open-minded, try new things and find what you love.

Although she was speaking about her athletic career, her words resonated with the school’s production crew who ran the entire Sharing the Dream web production — which was broadcast live in more than 25 countries.

“I believe that everyone has the potential to be great at something. If you find something that you absolutely love to do, you can be the best that you can be at it if you set your goals, if you make the right choices every day,” said Huynh, Canada’s first female athlete to win a gold medal for wrestling.

Huynh’s words ring true for eight Heritage Woods students who ran the live webcast, as many of them have found a passion for film and broadcasting through hands-on experience provided at the school.

These career-building opportunities will continue over the next two years, since Heritage Woods was chosen as the venue to stage six Olympic-themed web productions.

Students from across the province will travel to the Port Moody high school to host interviews with well-known guests.

Meanwhile, Heritage Woods students will operate cameras, soundboards and lighting equipment, plus act as directors, producers and editors of the hour-long programs.

Part of the webcast’s camera crew, Grade 12 student Jordan Williams is choosing a career path based on interests he developed in the school’s film class.

“Last year, I took the class and I loved it. It made me realize, wow, I really like this and I want to pursue it,” said Williams, who applied to study broadcast journalism at the University of Miami and film at Capilano College.

“I’m either going to be in front of a camera or behind one. I have an interest. This is a once-in-a-lifetime opportunity.”

Like Williams, Grade 11 student Johanna Cryer feels the school’s film program could help her forge a future in the field.

“When you first come into this class, it’s just like a fun class. But then you end up getting so into it, and eventually this is what you want to do,” said Cryer, adding that she enjoys engaging her creative side.

Heritage Woods’ film teacher Mike Schoenhals said many of his students hope to get a job in media arts — like film, broadcasting or game design — after they graduate.

“It’s neat, especially in Vancouver because they have so much opportunity here. It seems to just expand all the time. Not all places can say that, but we really are Hollywood North and there’s real opportunities for these kids if they’re passionate about it to work in this field,” said Schoenhals, whose students will show their work in the school district’s first-ever film festival in June.

“For many of them, that’s what they want to do in some aspect. It’s a great opportunity for them to get started. How many kids come out of high school with practical experience in it?”

Education Minister Shirley Bond awarded the local students with accolades for their work on the webcast.

“You were very professional and you did a great job. And it will look great on your resumé. You can actually say that you did an Olympic production,” she told the crew, which was mentored by experts from Interactive Netcasting Systems.

The webcast series will be archived at http://bcelc.insinc.com/sharingthedream/20081112/, and the next production will be filmed at Heritage Woods on Feb. 19.