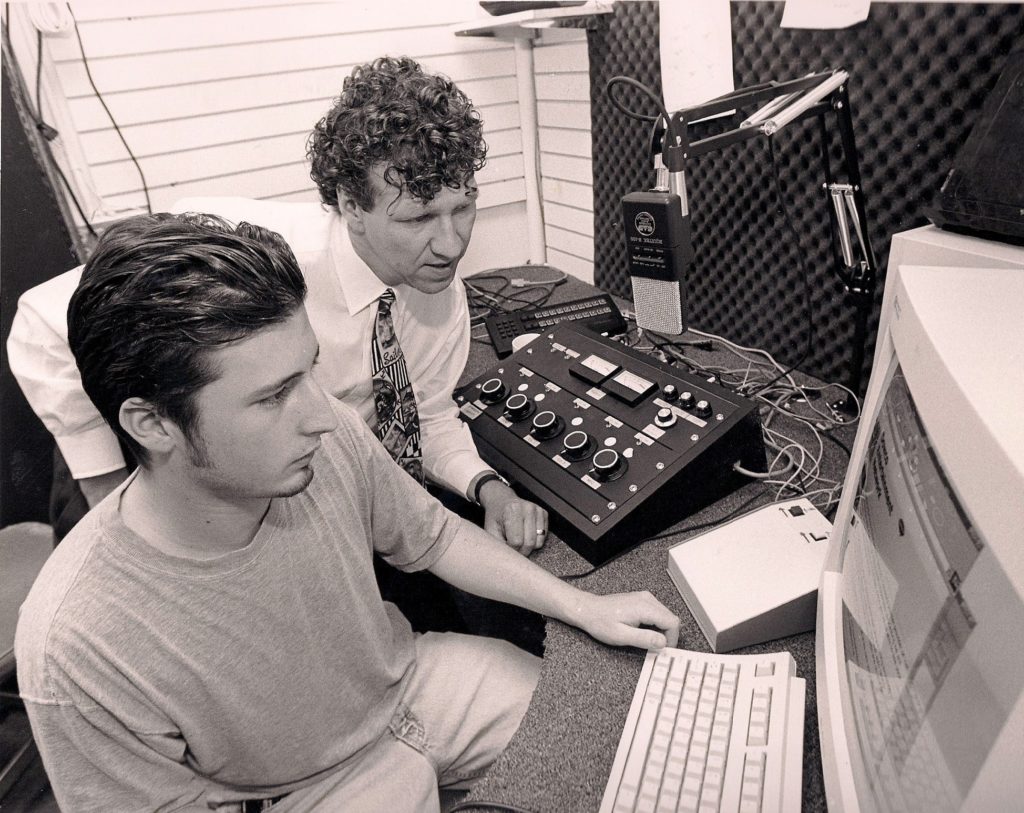 The Dowco studio measures perhaps 15 by 10 feet. The equipment is piecemeal, with an assortment of components. It’s certainly nothing like the million-dollar computerized radio studios you’ll find in downtown Vancouver.

While the signal from those expensive stations may start to break up just before Hope, that pint-sized studio in Coquitlam leaves the others in the dust. Its reach is the world.

The difference between the two is the delivery system. Those big radio stations send programs through antennas, satellites and other means. Dowcos’ programs’ signals travel via the Internet.

“It’s amazing stuff,” said Dowco’s Hugh Dobbie Jr. “There were a lot of people that doubted it when we wanted to get things going.”

The doubters included a major radio company. Dobbie and radio host Tom Lucas negotiated with one for months before finally deciding to go on their own.

“After lots of talks and meetings, we finally just had to say, “Thanks but we’re just going to go ahead on our own,” said Lucas, a veteran of CFUN when it dominated the Vancouver radio wars.

The Dowco Entertainment Network sends 12 shows out on to the Internet directly. All a net user has to do is download a copy of software called RealAudio and tune into Dowco’s world wide web site.

The possibility of this technology is vast. Expensive satellites that beam radio signals around the globe could become obsolete as radio programs use the Internet to get signals to stations.

Dobbie, known to Internet listeners as Huey the Net boy, figures live television or video is just around the corner as the info highway becomes faster. Lucas got into radio at the age of 18 in 1968. He’s seen it all.

At least he thought he had until last Sept. 29. That’s when he and Dobbie launched the very first Internet-based radio program. The first program was late in going on. It was pretty makeshift. But they got it on. A lot of people thought they couldn’t.

“It’s come a long way since then,” Dobbie said of Lucas’ retro rock radio show. “Back then, we had to get in-laws to phone in. Now, all the lines are full all the time.”

What makes Lucas’ show stand out from others is the program is created for the Internet first (unlike stations like CKNW that are packaged for radio and then get sent on to the Internet).

Being an Internet radio program means your audience is different. The programs have a 1-800 phone line so people can phone in from anywhere. You can also e-mail the host with your comments and requests.

Here are a couple of examples of what online listeners have thought of the program:

Lucas now has his program on 10 different stations. They all choose to collect the signal the old fashioned way — off a satellite. But for one program, the satellite couldn’t send so a few of the stations just plugged into the Internet and downloaded the program live that way.

“A lot of this is sort of like being a pioneer. Just like Marconi and the others,” said Lucas. “It’s a bit of an adventure.”